Monday was not a good day. Honestly, we’ve been having more bad days than good lately. Monday afternoon I was feeling downright sorry for myself.

Probably because we spent Monday afternoon at the children’s hospital. Brigham is still grabbing his ears and screaming and also has a wet cough that won’t quit. Considering I just got over pneumonia I was concerned that he got it from yours truly.

As if that weren’t enough, Landon was bitten by an insect on his foot. At first it was just a little red spot. But after a few days it was clearly infected. The redness spread and he developed a little whitehead with a black dot in the center. He kept saying, “Boo boo hurt bad, mama.” He was in a lot of pain and had been crying off and on.

With the help of grandma, I corraled both unhappy boys into the car and headed over to the children’s hospital.

The nurse practitioner was great. Landon screams and cries if you so much as look in the direction of his foot so the assessment was not pretty. She diagnosed it as cellulitis but said antibiotics would clear it up. That is, until I told her that both my husband and I have had MRSA infections. She scrunched up her face and told us in that case she was going with a different antibiotic. She drew a circle to show where the redness was and said if it passed the line we were to come back immediately. She also gave him a prescription for the most foul-smelling liquid antibiotic. I knew it would be good times getting him to take it.

Next up was my poor, unsuspecting 5-month-old. I gave her the short history of his ear infections up to this point. She looked into his ears and said both of them seemed to be healing. But she didn’t like the sound of his cough and he would need a lung x-ray. My 5-month-old. A lung x-ray. I can’t even tell you the guilt that washed over me. I thought sure he had pneumonia. 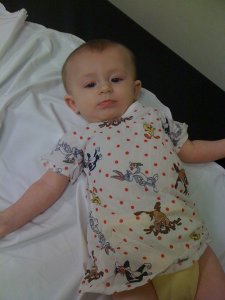 We put him in the most tiny, depressingly adorable hospital gown you’ve ever seen and walked to radiology. Everyone was oohing and awwing over my smashing baby boy. Because while he chooses to scream his little head off at home he was, of course, happy as a clam at the hospital. Didn’t even appear to be sick. I made sure to let the doctors and nurses know I wasn’t just a hypochondriac-crazy mama.

I steadied him as they took pictures of his chest. The radiology tech commented on what a shallow breather he was. That was the first time I took notice too. When we were done we went back to our hospital room and waited. And waited. And waited some more. As each minute ticked by my anxiety got increasingly worse. I suppose Landon trying to eat the crayons in the room didn’t help. Finally, the nurse practitioner peeked her head in the door.

“Has the respiratory therapist been in to see you yet?”

Oh.crap. Those were my exact thoughts.

Panic sets in. Oh my God. What is wrong with my baby’s lungs?

“Is there something wrong?” I asked.

She goes on to tell me that he has brochiolitis and what could appear to be reactive airway disease. I guess that’s a fancy way of saying asthma but they don’t want to say it because that’s all based on history and his history is obviously very short. She tells me that because he is still so young only time will tell.

Double crap. They prescribed him albuterol {same stuff I have been puffing on} and he has to inhale it through a tube and mask. He screamed when we put the mask on him at the hospital.

We were there for three hours. I dropped off Landon’s prescription at the pharmacy and went home to try to throw together something barely resembling a dinner. Then I quickly drove back to the pharmacy to pick up what would hopefully get rid of Landon’s cellulitis before it became an MRSA-filled abscess.

The pharmacy doesn’t have his prescription ready. Big surprise. So I sit down and impatiently tap my foot whilst staring down the pharmacist who promised it would be ready in thirty minutes. As I was sitting there an old man approached the chairs and sat down one seat away. I quickly pulled my phone out so as to appear busy. Because damn. I didn’t feel like talking. To anyone. About anything. To make matters worse, he had one of those portable oxygen tanks that pushes out air every few seconds. My nerves were shot so the noise was totally annoying. He also smelled strongly of medicine. My internal voice was smartass-ing him as I read my work email.

Then, there it was. His voice. “Winter’s right around the corner, eh?”

Ugh. Weather talk. You’ve got to be kidding me. I give him a glimpse of eye contact and nod my head praying that I would hear my name called over the store speakers.

A young dad rolls up to the counter with a cute baby in a jogging stroller. He picks up his prescription, turns around and leaves.

The old man talks again, “That was a fancy looking stroller. They didn’t make them like that back when my wife and I had kids.”

I glance his way and politely nod again.

“Yes, I have two boys. They’re both sick and I’m just waiting for their medicine. It was supposed to be ready.” I quipped with a sharp tongue.

He nodded politely in response. “You know my wife and I had three kids.”

Seriously, what is taking them so long. . .

He interrupted my impatience, “But there was a fire years ago and two of them didn’t make it. We lost our 10-week-old.”

I had no idea what to say. I have no idea what possessed him to open up like this. I can only guess it’s because he is lonely and talking about the children he lost is the only way to remind himself that they did exist. I felt as if I’d been punched hard in the stomach. The lump rose in my throat and the tears welled in my eyes. Time didn’t really matter anymore. The sound of the machine puffing became background music to his heartbreaking story.

He continued and I was captivated. He told me that even though it was over sixty years ago every time he sees a stroller it reminds him of one particular day. Not the day of the fire. But a day shortly after. He and his wife were walking in downtown Kansas City. He thought it might take their mind off of the devastation. As they window-shopped a young woman walked by with a stroller. Without a word, his wife took off running after the woman. She followed her into a store and tried to rip the baby from the young mom’s arms. He remembered that she was screaming it was her baby. It was her baby. But they couldn’t get through to her.

The pharmacist’s voice finally pulled me out of the man’s tragedy and back to my reality. A random man sitting one seat away from me in the pharmacy. A man whose eyes I was so reluctant to look into. A man whose story ended up changing my heart.

Still caught in the utter chaos of this stranger’s story I clumsily told him how sorry I was that it happened to him. He told me not to worry. It was a long time ago.

And then I said, “But it still happened. Your kids still matter.”

“You never forget,” he said.

I stopped complaining when I got home. I was overwhelmed with gratitude.

The three hours that we spent in the hospital didn’t seem so long. The infant hospital gown didn’t seem so depressing when looking at my peacefully sleeping baby in his monkey pajamas. The swelling in Landon’s foot didn’t seem like the end of the world.

All because a stranger who sat one seat away from me at the pharmacy down the street told me his story. It got me thinking about the random placement of people in our lives.

Maybe that store associate who told you you look fabulous in that outfit was telling the truth.

Maybe that asshole who cut you off in morning traffic was actually an angel telling you to slow down.

Maybe the old and lonely man in the pharmacy has a story to tell that will make your awful day seem like a walk in the park.

Maybe. Just maybe. The placement of people in our lives isn’t random at all.

This piece landed me in the cast of Listen to Your Mother Kansas City in 2013 – You can see me read it aloud on stage.