Brigham is 21-months-old. It is very hard for me to grasp that Landon was this same age when Brigham was born.

You see, Brigham can communicate. He can say a lot of words at this point. But we can’t have conversations with him. We can’t make him understand how things work. He has to figure that all out on his own in the coming years.

So when I look at Brigham and think that Landon was this age when he became a big brother? Well, it just astounds me that Landon handled it as well as he did. He was so young. Looking at Brigham at 21-months solidifies that fact. He just seems so little to me.

I never really talked about how Landon reacted to his new baby brother when he first saw him. The truth is, it wasn’t that heart-explosion experience that I had pictured during my entire pregnancy.

No, my parents brought Landon to the hospital the morning after Brigham was born. We were so excited for him to meet his brother for the first time. But when he came into the room he freaked out. He got really quiet and seemed very confused as to why I was in a big high bed, unreachable to him.

We lifted him up so that he could see Brigham in the isolette. Hopefully this will give you a tiny glimpse into how that went over. He approached with such trepidation. 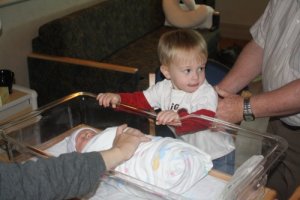 So we tried to approach it another way, which didn’t work either.

Then, as if it couldn’t get any worse, he went and hid behind the bedside table to get away from everyone. My heart sank and I tried not to cry.

When I look back I think his reaction makes perfect sense. He was frightened. Here he is in this new place with new smells and his mom in a hospital bed and we’re putting him face-to-face with a baby he has never seen before. Poor guy. He was completely overwhelmed.

I’m not sure how we could have handled it any better. Maybe not brought him to the hospital and waited for him to meet Brigham at home? Knowing Landon a little more now, he tends to be very timid in new situations and is leery of new people. Brigham was probably no exception. It takes him a little while to warm up and decide if he’s going to like someone.

The next day, my parents brought him back and he did much better than the day before.

I guess I’m telling this story because I think it might help someone. I want to be transparent on my blog. The siblings meeting for the first time isn’t always picture-perfect, especially if your oldest is still fairly young and can’t understand what’s happening. Their little world as they know it gets turned upside down and they have to re-learn how to live with this new baby invading their only child status.

But after the newness wore off, the sweet brotherly love was uncovered.

Just look at this blast from the past . . . when Landon was 21-months-old. It is my favorite video I’ve ever taken.

Brigham is 21-months-old. The same age as Landon when they met for the first time.

And now, they’re rolling around together, wrestling each other, jumping on beds, and stealing each other’s trucks. Sometimes Landon gets super annoyed with Brigham. And sometimes they are best friends, building blocks together while building brotherly love.

I guess it’s just as it should be.