It’s hard to believe that I’ve had three babies and never shared some of my favorite newborn items with my readers! I have to admit, my list for my first baby would probably be way different than it is now. By the time you’ve had three babies your list of must-have items is pretty minimal. It’s really exciting to buy a crapload of the most expensive stuff when it’s your first baby. But now it’s really quality over quantity. 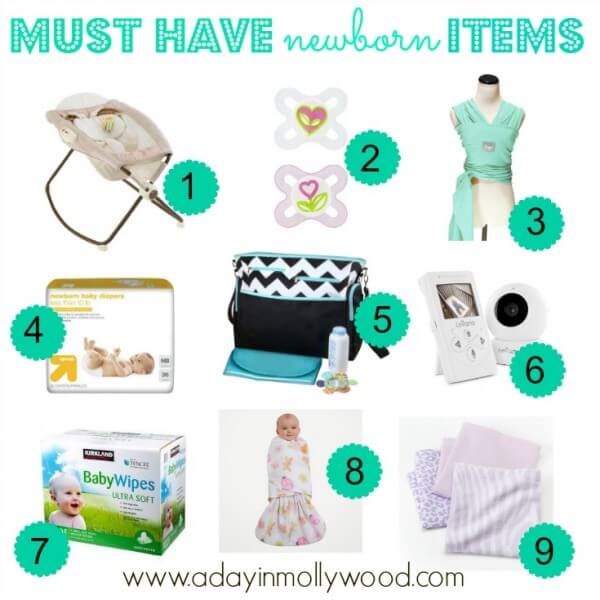 1 | Fisher-Price Newborn Rock n’ Play | During my pregnancy I emailed a blog friend who had just had her third baby. I asked her what she would buy if she could only buy one thing. This is what she recommended. I had a gift card to Amazon and so I quickly purchased a rock n’ play. With both boys I had them in a cosleeper right next to the bed but I sold it. So I needed another option since I like to keep the baby right next to me after they are born. Sure enough, Sawyer was born and slept in this for the first two months. We have now transitioned her to her crib but she still naps and rests in this and really seems to love it!

2 | Mam Start Silicone Pacifiers | My children have never been huge on pacifiers. Landon never took one and Brigham would last maybe five minutes with it before he spit it out. These have proven to be the favorite for Sawyer. She is BIG on the sucking reflex! But with two other kiddos I can’t always get to her fast enough. So I pop one of these babies in and I have an extra five minutes to do something before I feed her.

3 | Happy Baby Wrap | With three kids I knew babywearing would be a must! I researched quite a few wraps and decided to try a new brand that I hadn’t heard much about. I read some reviews and followed them on IG. I finally bit the bullet with a coupon code and when it came I couldn’t wait to try it. I figured out the hold quickly and placed Sawyer in the wrap. She was asleep within minutes! I was able to do the dishes and play with the boys while also keeping her close. Highly recommend buying at least one wrap to have on hand!

4 | Up&Up Diapers | I use disposable diapers. Sorry Mother Earth, but I can’t keep up with laundry as it is. And Sawyer poops after every.single.feeding. No way can I handle cloth dipes as a full-time working mom. I tried cloth twice but it just wasn’t for us. I fell in love with the Target Up&Up diapers when Brigham was still in diapers. They did not have newborn size when Brigham was small but they do now! They are my favorite and believe me, I’ve tried every single brand. They are cheap and even better – they often have coupons and Cartwheel offers. You can also use your Target debit redcard for an additional 5% off. If you combine them all it is a HUGE savings on diapers. They never leak, don’t have a strong smell and never cause rashes on my baby’s skin. Target, for the win.

5 | iPack Chevron Diaper Bag | With Brigham I had a very expensive diaper bag and it was great for all the right reasons. I sold it last year and when I found I was pregnant again I knew I would not be spending $100+ on a diaper bag. One day I was perusing Walmart.com and came upon what looked like a beautiful diaper bag. It was the design that caught my eye but the price and reviews were amazing too! I decided to buy it and hope for the best. When it arrived I knew I had found a great bargain. It looks much more expensive than it is ($22.96!!!). I constantly get compliments when I’m out and about. Women come up to me and ask me where I got it and are stunned to learn it’s from Walmart! Turns out I’m not the only one that likes it. It is constantly sold out! But I had to put it on here because most women wouldn’t think to look at Walmart for a diaper bag.

6 | Levana Lila Video Baby Monitor | Okay, okay, I’ll admit that I said I would NEVER buy a video monitor. I honestly thought they were kinda dumb because just get up and go into the nursery already, people! But when we decided to transition Sawyer to her crib at two months (seems so early to me!) I knew my anxiety would be on overdrive. I started researching baby monitors and found this one. It got great reviews and the price was not bad at all. I bought it on sale at Amazon for $99. Well, I am sold! I love being able to open my eyes and see her on the monitor without getting out of bed. Usually she just fusses for a minute and falls right back asleep. But if I went in there to check on her she would probably wake up! I’m definitely a video monitor convert and this is a great price-point. The only downside is my fear of ghosts communicating through white noise  ::shudders::

7 | Kirkland Premium Baby Wipes | I’ve used so many different brands of wipes and these are my absolute favorite! You buy them at Costco (need a membership) or you can get them on diapers.com or amazon and they come in a box of 900. Holla! They aren’t too sticky, don’t have a strong smell. They are just the right thickness and most importantly – they clean up the worst dirty bottoms with just a couple wipes! Strongly recommend. It takes forever to run out of these things!

8 | HALO SleepSack Swaddle | I tried to swaddle both boys and it never worked. They hated their arms to be down and wanted them above their head. But with newborn reflexes this also meant that they often woke themselves up. We received three or four different swaddle options as gifts and nothing worked – until we tried the HALO SleepSack Swaddle. When we transitioned her we put her in this the first night. It was mostly an attempt to keep her warm more than anything. But six hours later she hadn’t woken up! And it’s been like that really ever since moving her to her crib. She sleeps anywhere from 5-7 hours a night without getting her arms out of the swaddle. I feel like this is the safest option as well. You don’t want to put any blankets in the crib with your baby and risk suffocation. So not only does this keep her snug as a bug in a sleepsack (hehehe) it also keeps her ASLEEP. What more could a sleep-deprived new mom want?

9 | Summer Infant Muslin Swaddling Blankets | I know everyone always recommends the other really popular brand of muslin swaddling blankets. I went shopping one day trying to find those and couldn’t. Then I saw these and thought, well, it’s worth a shot. They are pretty much the same thing – only a bit cheaper! They are so soft to wrap her up in and stylish too. I recently saw someone on pinterest use these as scarves for themselves. So I went to look at mine again – I purchased the lavender set – and sure enough they will work as scarves for me too! Love the double duty!

So did any of these items make your must-have list? What are some of your favorite things for newborns?