In an earlier post I discussed that my anxiety had been growing because Sawyer seemed somewhat “floppy.” This was something that I noticed early on. When I held her at two months I noticed that she had very little head control still. She also wasn’t putting any weight on her legs at all. They were completely limp. This caused me great worry.

Part of me was thinking back to when Landon and Brigham were infants. Both of them were very strong right from the beginning. They were holding their little heads up like champs and their legs were holding weight from the first week. They were sitting up unassisted by four months, pulling up to stand by six months and Brigham even took his first steps at eight months! I know that that’s not the norm. But it was hard not to compare Sawyer to the boys’ development since that is what I had already experienced.

I tried to push it out of my mind but postpartum anxiety got the better of me. My fears grew as I started to google things. Let me just reiterate to new moms – Google is NOT always your friend when you have questions.

At her four month well check up I shared my concerns with our pediatrician. She examined her and while she was doing that I told her that she seemed to be meeting all her other milestones. She was rolling from back to belly, smiling and laughing and tracking with her eyes. She had never been sick. She was gaining weight and following the growth chart perfectly. There were really no other indicators that anything was wrong. Just the fact that her neck and legs seemed weak. The doctor told us to work with her more and if she wasn’t much better in a month to call and she would refer us to a physical therapist.

Fast forward a month and I still had concerns. I had really pushed Sawyer for the last four weeks to put more weight on her legs and to hold her head up. I thought maybe it was my fault because I do hold her and cuddle her a lot. Maybe it’s just that I wasn’t allowing her to use her muscles enough. So I would lay her on the floor and then gently pull her up by her arms. Sometimes she would do a good job at pulling her neck to her chin. But there were many times when she wouldn’t pull it forward at all or it would sort of plop down once she reached a sitting position. Naaman (and probably everyone else) thought I was making a big deal out of nothing. And that very well might have been the case. Call me overbearing but I just wasn’t comfortable with ignoring this.

I told the pediatrician that I was still concerned and she referred us to a physical therapist for an assessment. That was in late May and we finally had our appointment yesterday.

The physical therapist held her for awhile and I could tell she was trying to figure out exactly how weak Sawyer is. Finally she said that Sawyer has a mild case of low muscle tone and a bit of hyperflexibility in her legs. However, she didn’t see any red flags to warrant further testing. I asked her why this would happen and she said sometimes it just happens for no specific reason. She did say that there is a genetic component and asked about our other kids. But neither Landon or Brigham ever had any issues with strength.

I did tell her how difficult the end of my pregnancy was and she said that my illness and all the antibiotics could have caused her little system to be overstimulated. This could explain why we could barely wake her up the first month. She slept so soundly, as if she was absolutely exhausted. I don’t blame her one bit! I was tired after all of that awful sickness too! I’m not going to lie, I feel a lot of guilt. I feel like maybe if I had tried harder to be healthier during my pregnancy this wouldn’t have happened. Maybe if I had eaten better, exercised and taken more vitamins, Sawyer wouldn’t be so weak. But I know that’s just me giving myself a hard time. I have to let those thoughts go because it’s in the past.

The therapist showed us some great exercises to help Sawyer continue to gain strength. Even with the low muscle tone she does not feel that Sawyer is delayed in any way. That is music to my ears! But she does want us to work with her as much as we can and come back to be reassesed in a month.

I feel so positive moving forward and even though I think that Sawyer is going to be fine I am glad that we went. It really eased my mind to have a professional take a look at her and give us a diagnosis, however mild it is.

Our sweet girl gets a little bit stronger every day and I know someday soon all of this will be a faint memory. 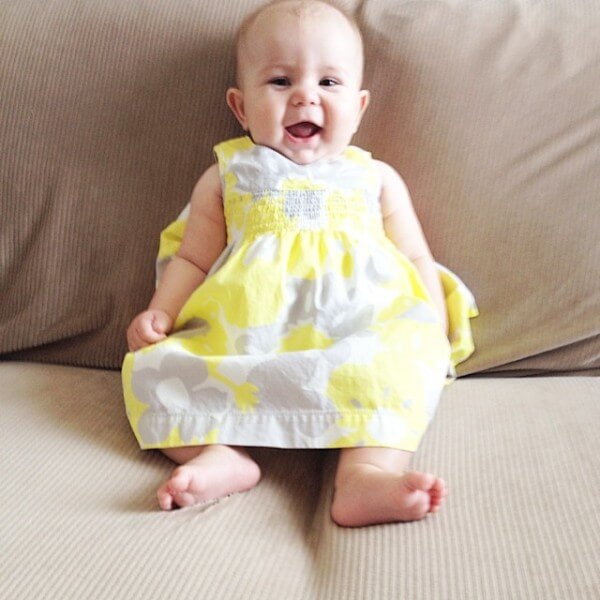 Now Sawyer – it’s time to get our workout on, girlfriend. I wonder if they make baby leotards and legwarmers?